This cold is really doing a number on me, so I took a long time to pack up and got out a bit later than normal today. It wasn’t until about 9:30 that I found myself walking out of town.
The first part of the day actually felt pretty dangerous- walking along the side of a no shoulder highway. The road was nestled between a cliff band and the Colorado River. Most of the passing drivers were pretty good, but a few were zooming by and there were some tight corners.

After about a mile and a half I turned off on my alternate route. The main Hayduke mostly follows roads for this section. This is a newer alternate, just put together last year by Jamaal Green. I figured it sounded unique and I wanted to give it a try. It explores an area above Moab called Behind the Rocks that is filled with unique  rock formations.

Looking down at the Colorado River.

Up I went on “The Stairmaster” climb up to the Moab Rim. This area is also really popular with ATVers, but fortunately there weren’t any up there at the same time today (though there were a few in the parking lot getting ready to head off). In fact after heading up to the Rim I only saw one trail runner all day. The trail is about 1,000 feet in 1 mile – about the same as a quarter of the way up Mt Si for all you Washingtonians. From the top there is a beautiful view back down over the city to the mesa beyond and Arches! It’s really neat seeing how the landscape all forms together.

The view over Moab and back to Arches. So cool!

I followed the 4×4 roads for a while into the Behind the Rocks area before striking off on the adventure part of the day- route finding among the fins. I spent the day weaving in and out of them. Up and down, left and right- I had my map, GPS, and route narrative out frequently. More than once I had to backtrack, or switch sides of a canyon wall. All the navigation, coupled with the cold and sore feet made for a long day.

Looking out over the fins in the heart of the rocks

But I enjoyed the adventure of it, and got to see so many fabulous things! At least one other group of people has done the route recently too because there were some freshish tracks I was following. There was a beautiful Arch that I passed too: Pool Arch. You look down on it from above, and the rappel anchor nearby signal that folks rap down through it! 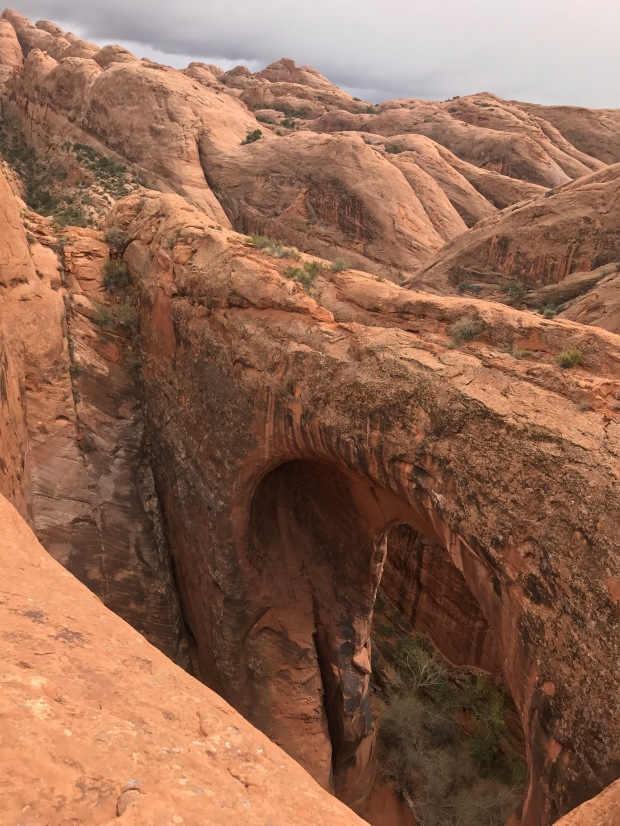 The navigation and tight brushy canyons made for slow going and so I didn’t make nearly the distance I was hoping too even though I pushed all the way until dark.

Heading up the brushy long canyon between the fins.

Finally by the end of the day I linked In with some 4×4 “roads” and that helped things speed up a bit- though it’s pretty crazy seeing where some of these roads go!!

I’m excited for a hot dinner tonight though! Because I couldn’t fly with fuel, I went ” no cook” through Arches. It will be nice to have a cooked meal again!….now if I can only scare away this mouse that just started dancing through camp…

I wanted to take the photo before it got too dark.