It was another warmer night than predicted. So no frozen bottles! The route was pretty straight forward today. Nearly 23 miles straight down Bullrush Gorge, which turns into Park Wash. Early on the majority of it was through the sandy sandy wash bottoms, some of the worst that I’ve walked through, before finally being able to pop up onto some old jeep roads which turned into currently maintained roads. 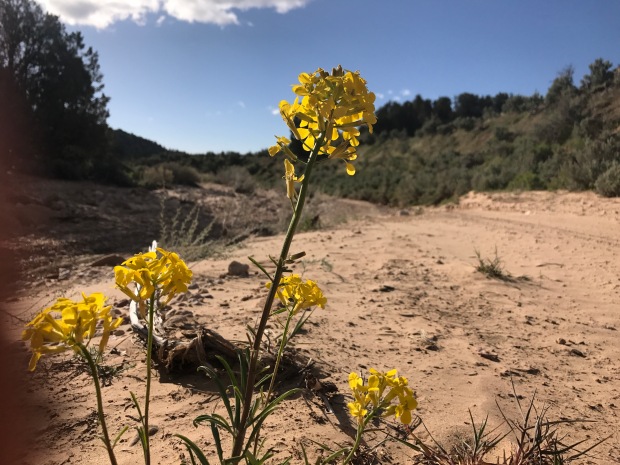 Beautiful yellow flowers made the sandy slog easier to take.

I walked through two more layers of the Staircase today. First the White Cliffs and then the Vermillion Cliffs.

A look backwards towards the White Cliffs

There were some beautiful views towards the cliffs, but with the easy road walking what really gave this section some of its character was all of the random cowboy era things punctuating the countryside. First, there were tons of metal tanks with spring water from somewhere around piped into them. I saw more overflowing tanks in this section than anywhere else on the route.

Adams Spring. I also discovered one of those stealth wildlife cameras nearby.

Then there was the old cowboy shack nestled in a corner of the cliff- again with an overflowing water tank out front.

The shack’s metal roof was coming up and clanged and banged in the wind, most of the window panes were broken out and there were holes in the wall between the chimney and plywood but a peak inside the shack revealed that there were still cots and mattresses in the sleeping room and a look in the cabinets showed a full compliment of plates, glasses, silverware, and even salt pepper and baking supplies! 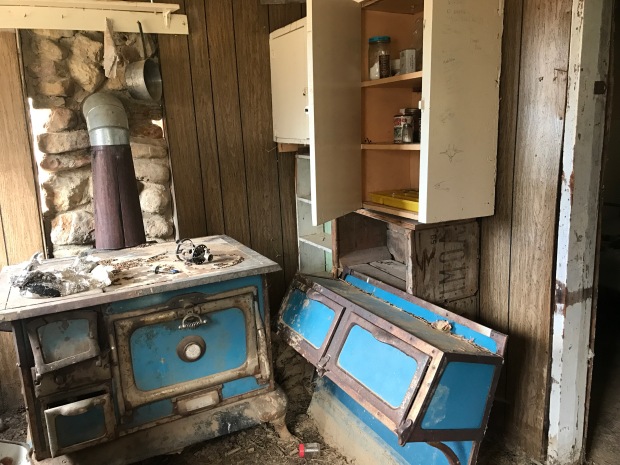 Rundown interior of the kitchen.

At the same time, it looked pretty vermin infested and so only a place I’d want to stay in the very worst most horrible of weather conditions. I then stopped for lunch by an old decommissioned windmill/well. It was a short lunch though as it spit rain on me through the whole thing (and then of course stopped when I stood up to leave)

Old windmill against the flowers and cliffs.

Then a few more miles down the road was an old bulldozer, now forever resting among the sage still smelling of oil and diesel.

It was about here that the transition from the White to the Vermillion Cliffs took place too, the cliffs  now a deep red punctuated with much more greenery on the shorter, rounder slopes. I passed the road leading to Mollies Nipple (I feel bad for whoever that was named after) and then down the road for 10 more miles, following the fence lines, through some restored sagebrush meadows and some unrestored grassy meadows, startling a cow and her calf (or did they startle me?) and passing a modern still functioning homestead. 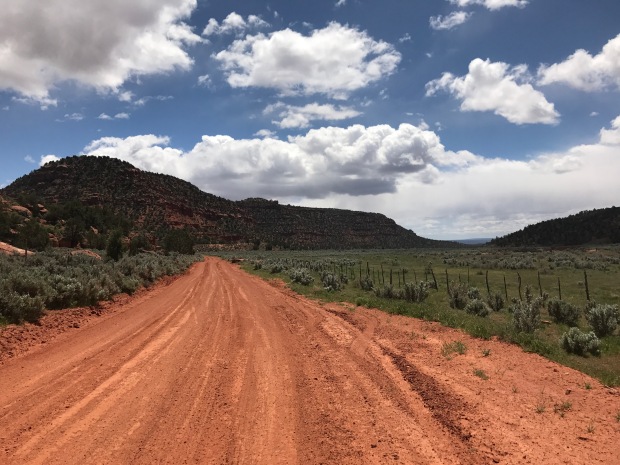 Through the meadows under the Vermillion Cliffs

Ten mostly fairly monotonous miles. I was pretty ready to get to the road and get my hitch into Kanab. In the last three miles I even turned my phone on and found that I had full reception so I started checking the news and researching places to stay in town- very unlike me on trail.

Suddenly, a half mile from the Highway I looked up and saw a figure walking towards me down the road. No backpack. Wearing shorts and a t-shirt, so not someone out for a midday run. Who would be out like that here? And then as we kept walking towards each other a huge smile crossed my face. 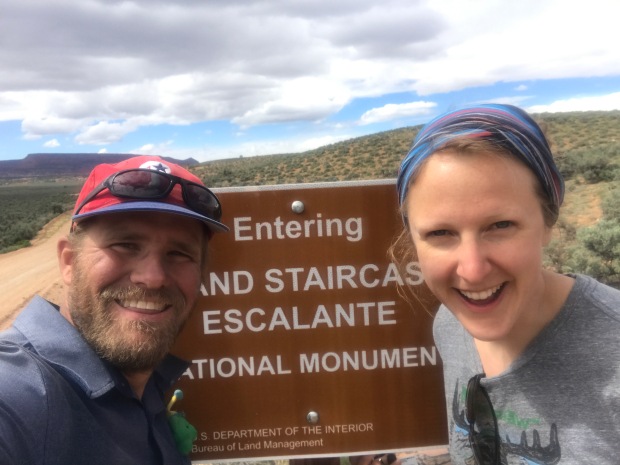 Being surprised by great friends in your journey is the best!

It was my friend Helen!! She’s been living the vanlife for the past few weeks road tripping around Oregon and California. I knew she planned on meeting me in Kanab tomorrow, but here she was at the trailhead today!!! I couldn’t believe it! It was so unexpected and exciting and heartwarming to see a familiar face.

We drove to town, got a room at the Travelodge, got dinner and some beers at the local vegetarian restaurant Peekaboo Canyon Wood Fired Kitchen (which is excellent and I would highly recommend), bought new socks (!!!) at the dollar market and then back to the hotel room where we caught up while we painted our toes.

As I’ve mentioned before, the complete solitude on this trail has been one of the more surprisingly challenging things, and so having a visit from a good friend just past the halfway point was just the right medicine. Tomorrow’s another day off in town, the last complete zero day I’ll have. Happy for rest and friends and new socks.

5 thoughts on “Day Thirty-Two: Down The Staircase”