There were rodents in camp last night sneaking around my pack. I’d secured all my food, but had forgotten that I had some Emergen-C in my first aid kit. Fortunately I heard the critter in my half awake state and chased it off.

Since it was looking to be another hot day I was up and out early saying goodbyes to as many folks as were awake. I spent today combining three different canyon trails- finishing the Beemer Trail before connecting to the Escalante Route and ending on the Tonto Trail. I had expected a relatively easy day, but it was anything but. Whether it was the heat or the ups and downs of the route, or if I misadded mileage  initially in the maps, I have no idea. I was on good trail for most of the day, but it took me all day to hike and I stumbled into camp exhausted. 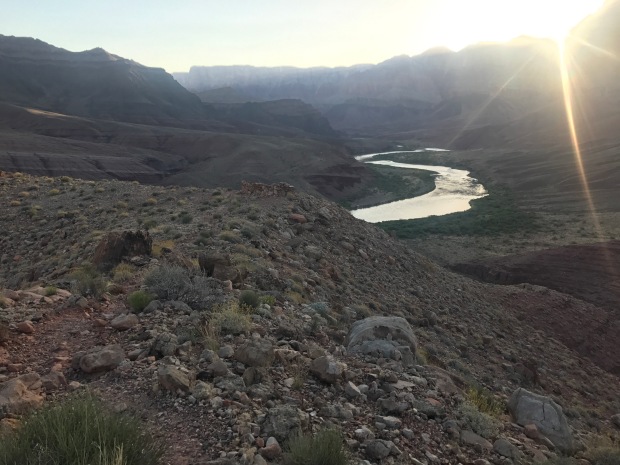 Looking up river over the Unkar Delta. There’s a small Puebloan ruin on top of the high point in the shadows.

The Escalante Route in the mid to late morning was the hardest part. Off the beach and up the cliffs just to traverse a mile up a side canyon, climb down to the bottom of the narrows and walk it back to the beach just to do it all over again. I lost both of my trekking pole tips in this section! 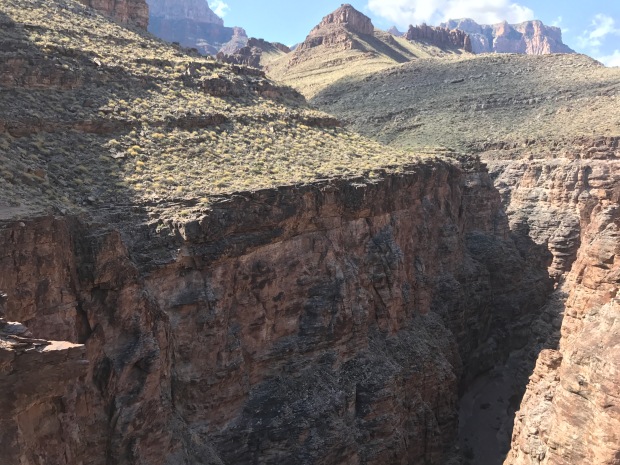 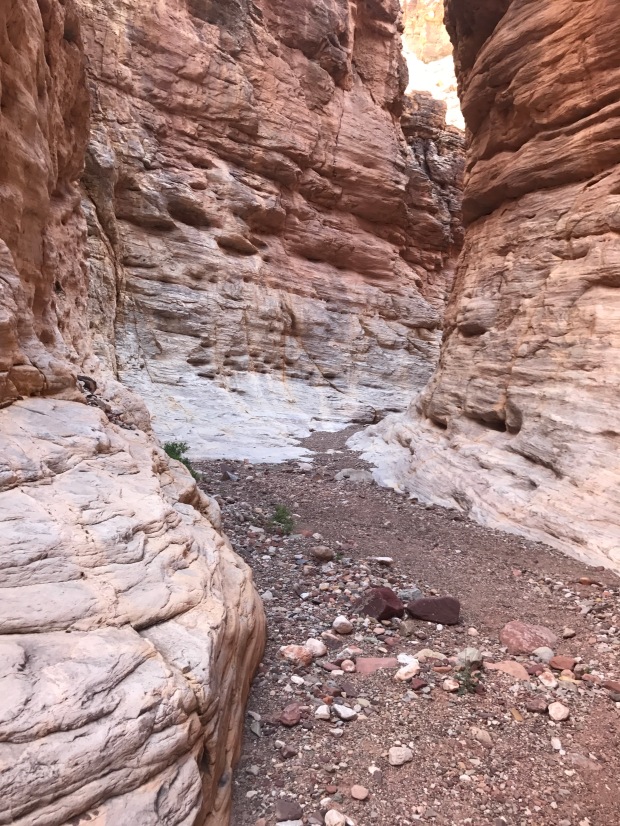 The canyon river views make all the work worth it though.

It took me most of the morning to get to the Hance Rapids where I decided to pull over for an early lunch, just in enough time to see the rafters pulling to the other shore to scout the rapids. I tried to call a few times but I don’t think they could hear me. Though they eventually spotted me and waved. I stuck around just long enough to watch them run the rapid. Much bigger than any we did yesterday.

The morning done I climbed a little over 1,000 feet up onto the Tonto Plateau, a relatively flat open area above the river, but still well below the rim. The trail picks a contour and holds onto it, monotonously winding miles into every side canyon, of which more and more continued to appear. 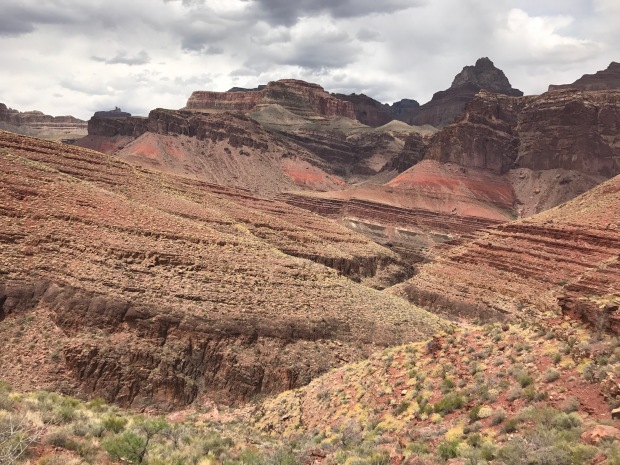 Winding through the side canyons of the Tonto Plateau. I do appreciate how you can see the tilt in the canyon rock layers very prominently here.

I kept walking what I thought was my regular speed, but the mileage on the map didn’t seem to be ticking off the way it should have been. It was like I was somehow stuck in slow motion. The roar of the river was gone with mostly just the sound of my feet to keep my company.

Midway through the afternoon I made a decision which probably didn’t help. A little bored with the in and out weaving of the Tonto I decided to climb up to the top of Horseshoe Mesa. This is actually the guidebook route, and a mile shorter than staying on the Tonto, but includes a 1300 foot elevation gain. I felt like it had been a while since I’d done some sustained uphill and with the prospect of climbing to the rim tomorrow looming I wanted to warm up my legs.

I am glad I went up. It definitely gave the workout I wanted (if slower than I expected) and there were a surprising amount of artifacts. Lots of old mining era equipment was strewn about the landscape.

The message scrawled on the wheelbarrow reads “Toxic Water”

One of the many mine entrances, right on the steep switchbacks.

The final few hundred feet to the Mesa top were very uneven and rocky, blasted right through the cliff. 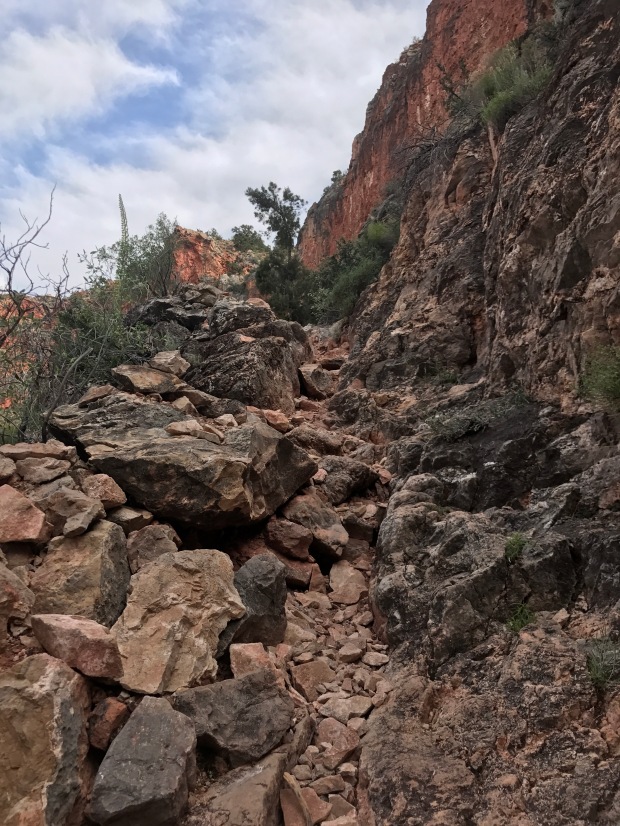 I thought I was safe at the top, but ran into lots of signs warning about the radioactive soil.

All that climbing up just to head back down again. Twisting and winding and slipping. I realized that If my mileage was accurate I wasn’t sure I was going to make it to my campsite in time. My legs were feeling tired and I really just wanted a rest, but I tried to kick it up a notch and power through. The cloud cover through most of the day had kept things cooler but the evening wind was suddenly gusting strong. Nearly blowing my hat off my head! If it’s not one thing it’s always another.

The Tonto Plateau stretching on

Finally I made the long curve into Grapevine Canyon, hiked the seemingly endless miles down canyon and arrived at the contour curve just in time for the sun to go down. Early start and late end. I still swear I went about 5 or 6 more miles today. We’ll see what the GPS says later. Hopefully the miles come easier tomorrow. 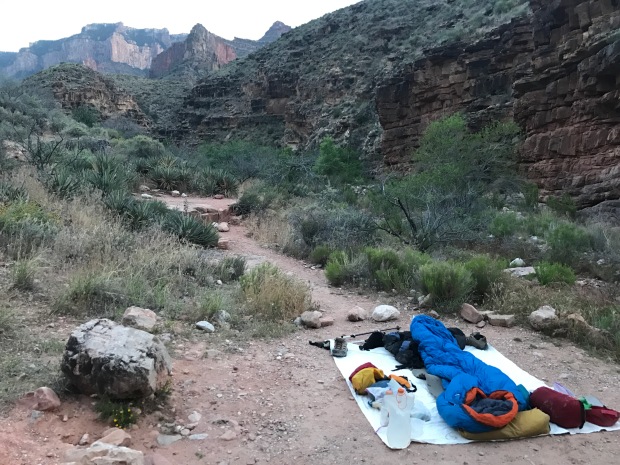