First: a note about mileage. A few folks have asked about the discrepancies between “map Miles” and “GPS Miles”. There are a bunch of reasons. I would take both numbers with a grain of salt and find the truth in between.

To start: many of the maps, and particularly the ones recently are handmade, some by me even. Therefore switchbacked climbs may be turned into straight lines on the map due to creator error. Then there’s also the issue of user error and detours. Sometimes the route goes by a highlighted site, but the extra quarter to half mile to get there is not included- that was the case for me through much of Arches. Those extra .2 and .3 Miles add up. Then there’s also the extra mileage added on when you go the wrong way- that is not accounted for in the “map Miles” either, but will be reflected by the GPS- something that happens to me more frequently than I’d like to admit. That said – the GPS also does it’s best with clear sky access. It can sometimes get bogged down in the tighter canyons and overestimate the mileage. How that’s helpful!

Now on to today: it was a great day! I loved my ledge camp spot. Around 2:30 this morning it started sprinkling but I stayed nice and dry.
The morning was overcast and actually pretty cold. I made a brisk pace on the miles into Needles Outpost and got in around 9:30.

The Outpost is a small store/ gas station and campground just outside the Canyonlands park boundary. It was pretty barebones, but just what I needed and the guy that runs it was super friendly. We chatted for awhile – he’s “retired” from UPS and lives in Moab but keeps pretty active. He’s been running the Outpost for 2 years but it’s going up for auction in May. He’s hopeful that the winning bidder keeps it pretty rustic, or even converts it into some kind of Outward Bound camp, but he doesn’t know what the fate will be.

I got my resupply box and bought two gallons of water and plopped down outside for the next five hours as my batteries recharged – literally and figuratively. I drank 3 quarts of water while I waited and ate a slow lunch. One of the reasons for the hesitation was that I was trying to decide my next route. Originally I’d planned an alternate route through the Heart of the Needles in Canyonlands- I’m here now, why not see the classic beauty. However this route has no water at all. The same for the guidebook route ( which few people do). The intriguing option was the Salt Creek/ Dark Canyon alternate route developed by Li Branfours. It was longer by about 15 miles, but Li says it’s more scenic and there’s tons of water (at least early on). I was a bit nervous about the longer length but I figured I could pull it off with the food I had as long as I hiked some long days. So the decision was made, I packed up and hiked on. 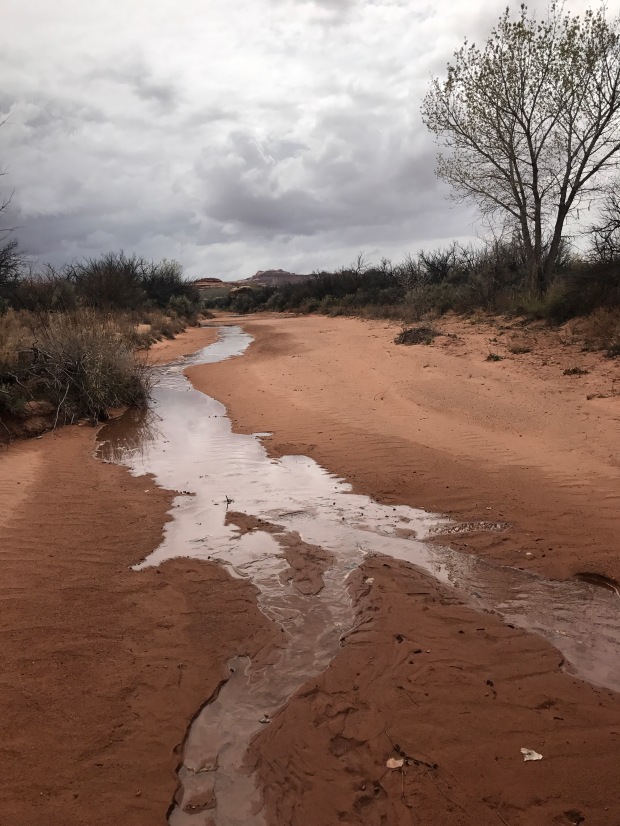 The bare end of Salt Creek appearing in the wash

Great choice! It didn’t take long while hiking up the Salt Creek wash for the creek to begin- first barely a trickle until it was suddenly taking up the whole wash! I hopped over it for as long as I could before finally giving in and happily splashing my way through the cold creek. Eventually an old overgrown and washed out jeep road opened up and the route through was clearly marked.

On the jeep road along Salt Creek

The hiking was easy and enjoyable. It’s so different from the landscape I’ve seen so far on this trip. Lots of water- a real flowing creek- brings so much life to the area. Birds flittered about and there was so much greenery. It’s still early spring here- the cottonwoods were about the only thing getting their leaves back so far. I can only imagine what it looks like in summer. 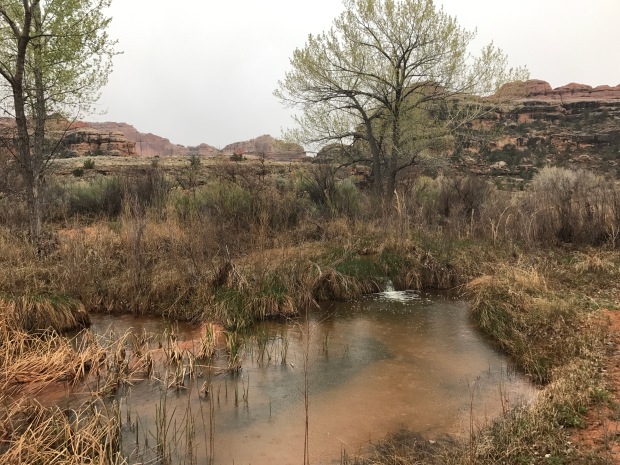 New growth in the cottonwoods along the creek

About 5 miles in the cool air and gathering clouds finally gave way and rain ( and a little hail) began. I grabbed my umbrella and was so excited to have now used it for sun and rain protection! The storm passed in about twenty minutes, but about 6 o’clock the rain restarted- not the forceful hard rain of before but the nice earth refreshing kind. I put on my new rain jacket and planned on hiking another 3 miles, but saw to the side a beautiful overhung alcove entirely dry. I could head over and set up camp right then- no need to even break out the tent! Cowboy camping in the rain is pretty special.
There was a shelf for me to put my things, and even a little hidden cave, rounded cathedral dome. I also noticed excitedly that there was a very small rock art design on the wall in the camp area! A great ending to the day.

Rock art in the alcove above my campsite

Dry camp in the rain!