The sky lights up so early now! I really wanted to be hiking by the time it was fully light at 5:30, but I stayed on my regular sleeping schedule and was on the road by 6.

While I didn’t head back out to the edge, it was beautiful to watch the colorful sky go through it’s morning ritual and the see the sun rise in full over the mesa beyond.

Back to the road, and 7 miles of mostly firm walking later I was finally to the top of my descent route. The West Sand Hill Crack. 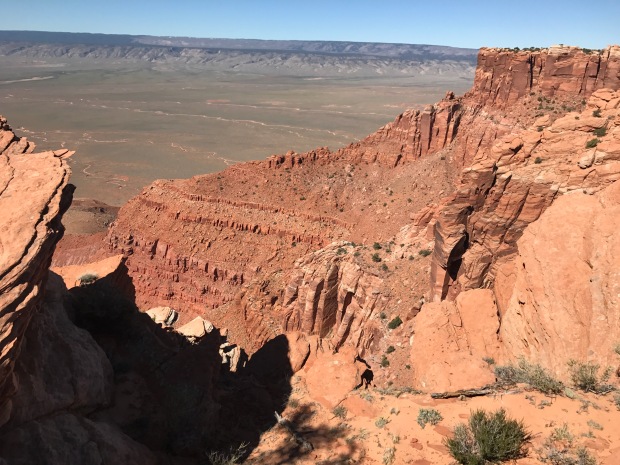 There’s a way down somewhere in there.

Yesterday it was 1800 feet up, and today it was 1800 down. The route description made it sound super easy and straight forward, but either the author is a mountain goat or I was off route for a bit. I did some of the sketchiest downclimbing I’ve done on this trip through here.

There was one pouroff that was a little crazy. It was probably 15 feet down, and looked like it would make a super slip-n-slide if there were water running down it. There was no exposure at the bottom and I thought it looked narrow enough that I could stem my way down, so I chucked my poles and then rope lowered my pack, and then tried to begin my climb down…only to lose my footing nearly immediately and slide the whole way. Horribly scary, but I landed on my feet, no scrapes or bruises and all is well.

One more sketch 7-8 foot downclimb later and I was kinda done with this route, but then I noticed cairns!

I made my way over to them and had easy route finding the rest of the way. 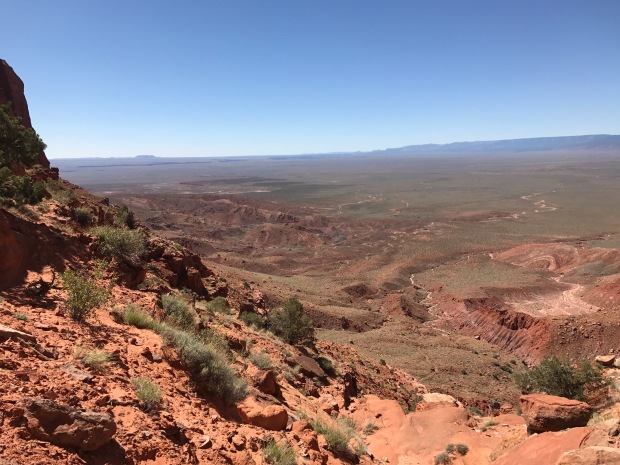 An hour later I was a little mentally worn, but had made it to the bottom.

I really hope that’s my last big off trail cliff. From here it was easy dirt road-walking the rest of the way to Highway 89A past an abandoned ranch at Jacob’s Pool and some pretty globemallow. 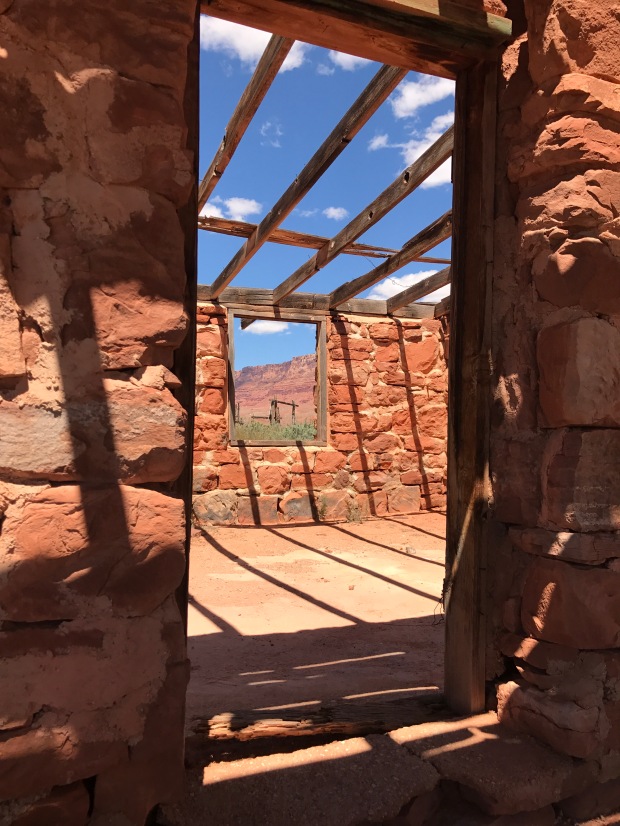 Through the door at Jacob’s Pool’s cabin. What a view out the window.

Globemallow under the cliffs. I don’t know why this is quickly becoming a favorite new flower.

I arrived at the highway at about 12:30. Really excited for the prospects of getting back to Kanab. I had a big list of chores to do, and since I wasn’t planning on taking a zero day tomorrow I was glad I still made it down semi-early even with the longer than expected day.

The Vermillion Cliffs towering behind, I situated myself near the turn off for a historical marker got my thumb out and in about 15 minutes someone pulled off! But they only wants to see the marker, not me.

There was a pretty steady flow of traffic. I’d sit down on my pack and pop up when a car came over the crest, get my thumb out, and then be zoomed by. Very few people even waved back or gave the I’m sorry arm shrug.

One hour turned to two.

I was getting a little more discouraged. The sun was hot and I was drinking through the gross reservoir water that I thought was just going to be for emergency use.

I had taken my shoes off and already had a sandle tan. There goes my big chore day. I was a little mad at myself too as I have a 5 mile road walk up 89A in the same direction that I could have done today, but decided to put off thinking I’d rather get to town faster. I could easily have finished it and be five more miles along.

There was a small pull out about 300 yards up from me and about five cars pulled over there, did whatever it was they needed to do and pulled back out. So much false hope. 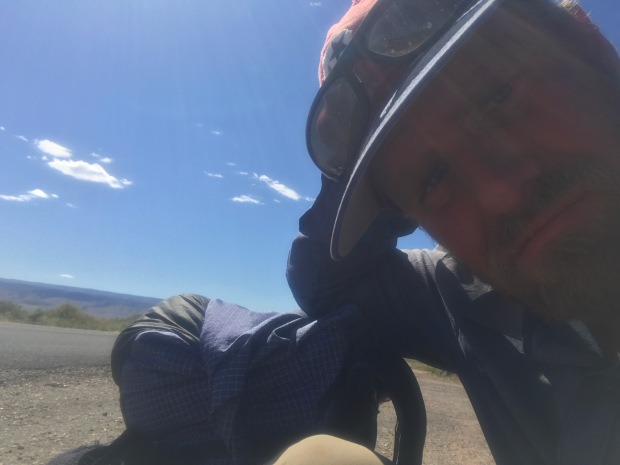 Will someone please pick me up?

At three and a half hours I was starting to debate my plan. It’s an hour drive, and then with the Utah time change I was looking at not getting in to town til 6 or later.

What if I started dancing? Would that help? What if I laid down and pretended to have fainted? Would someone pull over then?

I noticed there was more traffic eastbound and I wondered if maybe Page might be a better destination, so I sent DnR a message on the in-Reach to get the scoop on town.

Finally at four hours as I’m sitting down looking a little dejected a car pulls up eastbound with two young women and asks if I’m ok. Since they were headed the other way, I didn’t really give much hope, but I answered yes, I’m fine, just trying to get to Kanab to get some food.  They ask where that is and I say an hour in the other direction, and ask if maybe they’re going through Page. But that’s when they start looking up info on their phones. And then the amazing magic words:

“We’re actually headed the other way, to Vegas to catch flights tonight. We passed you about 7 minutes before and decided to turn around to check in. We can get you as far as Fredonia if that helps.”

Amazing!!! Fredonia is just south of the border from Kanab, and I couldn’t have been more thrilled. Mood instantly lifted! And what lovely hosts for the hour!

Sarah and Bridget are best friends from college who now live on opposite coasts. They travel frequently for work though and see each other fairly often. This was just a pleasure trip- celebrating their 10 years of friendship with a three day road adventure around Southern Utah, hitting Zion, Bryce, Antelope Canyon and whatever backways locals recommended. Sarah has spent a lot of time up in the Seattle area too and knew many of the good local hikes. She had just been to Colchuk last weekend! With great conversation the time flew by and we were quickly in Fredonia.

They pulled off, I hopped out and grabbed my things, they pushed some sparkling watermelon Perrier on me and refilled my waterbottles from theirs and we were on our separate ways. Best hitch ever. I’m so thankful they turned around, especially after so far, and took a chance on a dirty smelly hiker. Thank you so much!!!

It didn’t take long to get the hitch from Fredonia to Kanab. A pickup pulled over and offered me the 10minute ride in their truck bed. I’m always a little nervous riding in the back of a truck, but it wasn’t too far.

As we pull into Kanab’s one stoplight I hear a shout from the parking lot across the way… “DAYBREAKER!!!! DAYBREAKER!!!!” I look up and there’s Marmot!!!

What a great thrill!

The pickup guys drop me off and then huge hugs ensue. Marmot and Gabriel arrived today from Highway 89. What amazing luck!!! Kanab provides again!!!

I skipped the Travellodge this time, instead checking into the Sun and Sand Motel. It’s slight cheaper, and The rooms are a little dated, but what friendly folks!! Husband and wife run, and she was born and raised with the Norwegian fisherman in Ballard. Even have a “Go Hawks” sign behind the desk. They make homemade breakfast each morning and offered me just about everything you could imagine. Leftover dinner, beer, conversation. I would highly recommend this place to folks.

I settled in a bit, made my grocery list, bought new food and then headed to Escobar’s for dinner with Marmot and Gabriel.

I’m going to get a late start tomorrow, but I’m just learning to be ok with that. I’ll figure it out. After the completely dejecting hitch experience it was so great to meet such amazing folks in Sarah and Bridget for the ride and then find great friends in town. The trail provides.