That title about sums up the day. I tried to be fancy and write a haiku or something about my frustrations but then I kept getting bogged down in the sand again. It was also my fifth day completely alone. Why do they always come on the hard days?

I’m very glad I decided to put the climb off until this morning. It was about 1800 feet up in a mile. The route description read ” It took us about an hour to ascend for the first time in the dark (so should be even easier to decipher in daylight).” but I had a feeling that was overly abititious. It took me just under two hours to get up the cliff. No hard climbing, not really much loose rock, just slow and steady and making sure I was on route. But boy, what a fantastic rewarding view from the top!

Looking up canyon I could see all the way back to Bryce!

Down canyon as the river continues to widen.

Looking up canyon you could see all the way back to the Pink Cliffs by Bryce. Looking down canyon, the Paria glittered in it’s riverbed as the canyon floor began widening. I admired the view for an hour looking out over the beautiful landscape.

If I had known what was ahead though, I might have moved a little earlier. A mile cross country brought me to the old Bush Head reservoir and corrals, now mostly falling apart. The water was fenced off though and looked good!

From there I picked up the road system. When I had planned out the trek I knew today would be mostly road walking so I planned for a higher mileage day. Road walking always goes fast, right? What I didn’t account for was the terrain. Soft sandy roads. And a very slightly gradually ascending plateau. Nothing steep but just enough to add to the obnoxiousness. 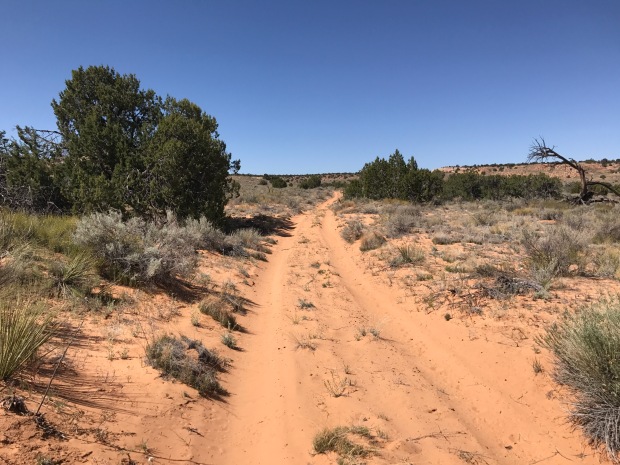 There was no escaping it. Feet sliding, ankles twisting. Pace cut way down. Hips aching. Working twice as hard and going half the distance.

I found myself needing to take frequent short breaks to rest. Fortunately there were two interesting ranches to explore along the way and get a reprieve from the sand torture. The first ranch was unnamed, but is about the nicest structure I’ve been to. 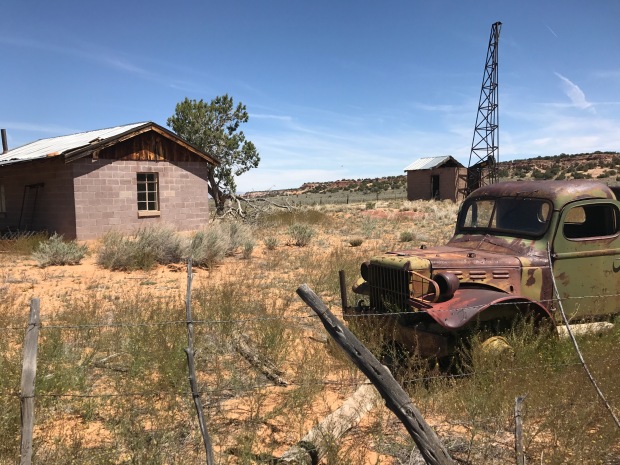 Concrete foundation, nice shady porch, windowpanes intact, no holes in the roof. There was even a gas fridge and stove out in the front lawn! When I opened the door to take a peak inside you could tell that someone is working on maintaining this place. Huge picnic table in the center, Full kitchen gear, plus a full 5 gallon cooler of water. Nice stove in the corner for warmth, and gas lights. There were even some pottery shards lined up on the windowsill. You could really see how this place could have been really nice back in the day.

The other ranch- Joe’s Ranch- wasn’t faring quite as well. You could tell that it had been nice back in the day too, a huge complex with multiple water tanks and barns and corrals. The house was still standing, but rustic inside (and again filled with multiple half full water bottles). It seemed like it was ready to fall apart anytime soon.

Joe’s Ranch. My spring is in the dark green grass to the right.

There was a spring here- more of an algae filled mudhole, but I needed water and there were tadpoles swimming around so I assumed it wouldn’t kill me. I filled up trying to avoid getting too much slime or debris. The water is a nice and light yellowy green color. That just means I’m drinking chlorophyll, right? I’m not excited to taste it tomorrow.

From the cabin I went cross country up the ridge and discovered that there was a much larger- and semi clearer reservoir just behind the first. I had already filled up though so I wasn’t going to spend more time to dump and refill. It was already 3:30 and I had barely gone 12 miles.

Looking down on Joe’s.

Up the nifty rocks behind the ranch, the cross country ran through mostly cryptobiotic soil territory. I felt horrible, but there weren’t many paths around walking through it…and then I got swarmed by flies. It must have been my penance.  Another mile or so brought me back to the road system and hallelujah! The flies disappeared and the walking was a little easier. I’m  not sure if it’s elevation or just where I was on the Plateau but there was much more dirt mixed in with the sand. I could almost walk a normal pace. There was even one road closed to vehicle travel now that had started rehabbing itself. The reestablished vegetation made for a much firmer walking surface. 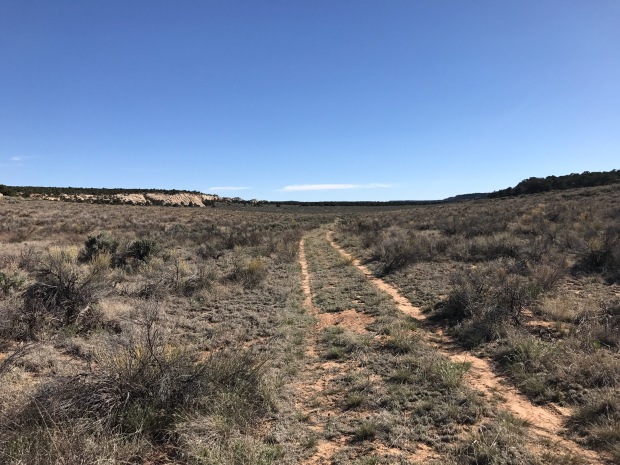 Much nicer roads in the late afternoon.

With a quicker pace I felt like I was flying down the road. But it still took a bit of time. Long ago I had given up on my initial goal, I’m probably 6 or 7 miles short, but I saw there was a possible detour out to the cliffs with good camping listed. It was only three quarters of a mile off, so why not?

Back to cross country and a little bit later I was standing on the edge of the Vermillion cliff band looking straight down into the early heart of the Grand Canyon, just starting to crack its way through the otherwise flat Mesa. Absolutely fantastic view. Even better since I was catching it just at sunset! I still need to get used to this happening at 7:30.

Sunset from the top of the cliffs. 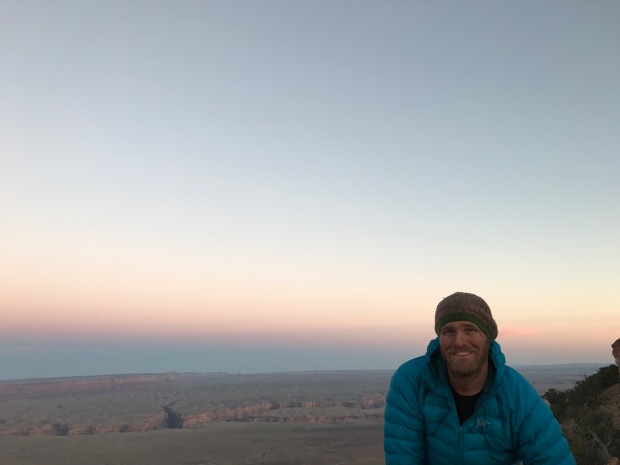 The Grand Canyon beginning its deep fracture in the Earth opens behind me.

I made camp just off the cliffs under a nice tree. Maybe I’ll catch sunrise tomorrow too! Tomorrow I’ll descend the cliffs and then head back to Kanab to get a weeks food. Then I’ll be down in that canyon before I know it!

Camping on soft duff is the best!