Today’s Miles Sponsored By: it could be you! Donate Today!!

When I first opened my eyes today in the pre-dawn hours I reached a hand out of my sleeping bag to stretch and brushed against a cold white wet film. Frost? Really? I looked out and it wasn’t covering any of the grasses in the area. Just my sleeping bag and my belongings. Blah.
Since I had plenty of time today, not many miles to make and the plan to do a lot of side exploration I thought, “you know? Why not just sleep one more hour?” Pack up after you get direct sunlight and can dry things out for a bit. Definitely the best plan. It felt so lazy and glorious to wake up at 7.

Following OHV roads in the morning- hopefully the last of the trail.

Once I got going I stayed with the sandy OHV roads for the majority of the morning heading through the nice grassy hollows east and north inching ever closer to the backside of Zion. A bit before noon the peaceful hike was broken by 3 OHVs gunning down the road about a half mile before I was to drop down to the East Fork Virgin River. When I got to the trailhead they were there waiting for me and apologized for breaking my serenity which I thought was a nice gesture. It turned out that we had the same initial destination in mind, so I bid them well and began the descent.

The upper stretch of the East Fork Virgin river runs through a nifty little canyon called The Barracks. The descent to get in wasn’t very far or strenuous and I was pleasantly surprised with how beautiful the area was. Pink and red walls rising up (but not too far) off the floor with green lined banks and the clear and cold river running through the middle. 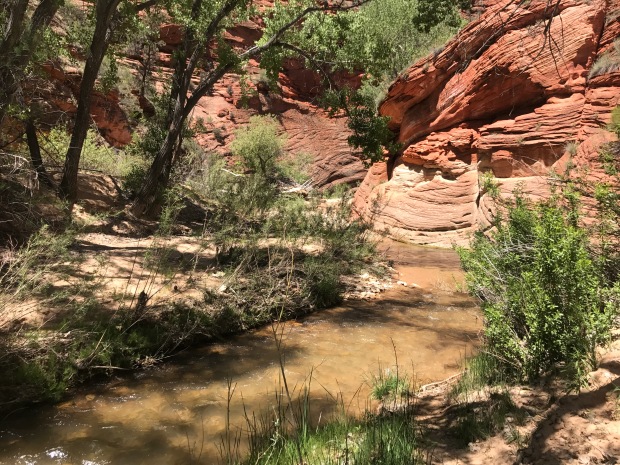 The quiet river and beautiful colored walls of the East Fork Virgin River.

A few hundred yards upriver of where I dropped down I had information about a petroglyph panel that I diverted to see- the same thing the ATVers were coming to check out. It was one of the most elaborate ones I’ve seen! 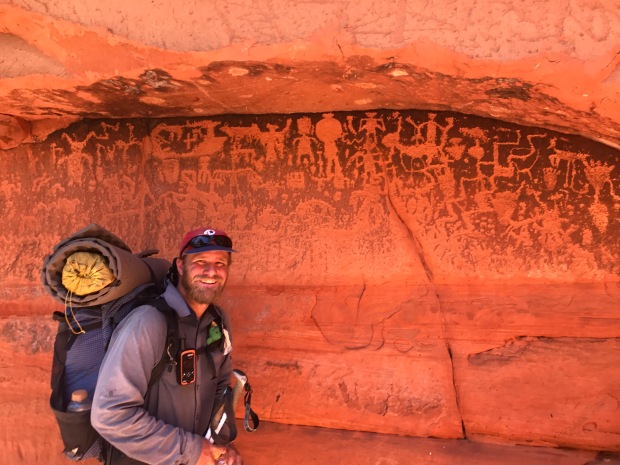 Carvings of humans, deer, snakes, birds, bear paws and so much more were jumbled together in the middle of the most extensive panel, probably accumulated over centuries. However the carvings stretched up and down the whole wall. The wall was angled just enough that most of the carvings were protected from the elements though you could see where many had weathered and worn away. I lingered for a long while before heading back down to the river where I had lunch in a lovely alcove that had its own decidedly more modern rock carvings.

The nifty little alcove where I had lunch. If you look closely in the rock in the left you can see some more recently carved faces on the corner.

There was some trail along the river, but also many wet fords which I didn’t mind. The cold soothing water feeling good in the hot weather. I actually opted for a little wading sometimes rather than finding the trail. It was also a pleasant surprise to find that as I progressed downriver the canyon walls got steeper and slottier and I took a nice slow pace enjoying the scenery.

The start of the Narrows in the East Fork.

When I arrived at the small creek coming out of Poverty Wash I dropped my pack and explored up the side canyon for a bit. Jamaal Green’s site acrossutah.com listed this, among many others, as nice diversions in the area, so I figured it would be fun to check out. The warm minnow-filled creek trickled it’s way through a narrow canyon filled with lovely trees, flowers and hanging gardens.

The canyon walls would play with you for a bit, narrowing and widening, back and forth, until suddenly it entered a dark narrow slot. 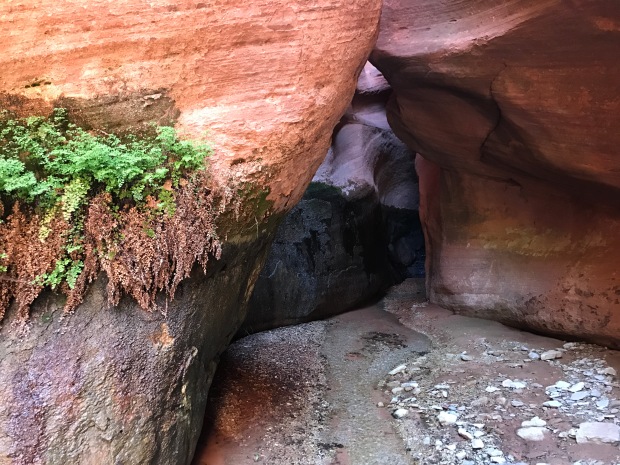 The beginning of the short dark Poverty Wash slot.

It wasn’t long, as you soon arrived in a grotto blocked by a dry waterfall, but it was one of the prettier slots I’d been through. The light bouncing off the high red walls was phenomenal. 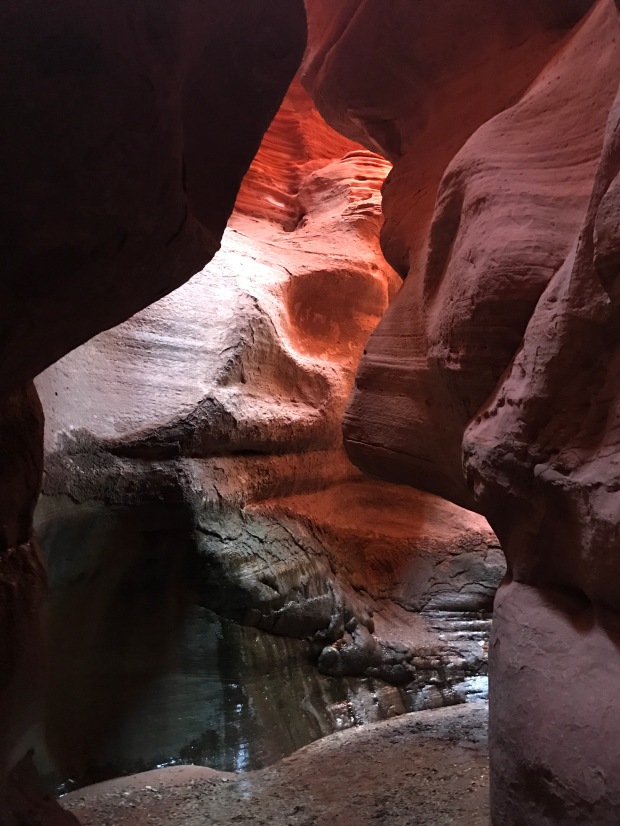 Mid afternoon sunlight caught glowing in the red rock of the slot canyon on Poverty Wash.

The entire side trip only took about 40 minutes and was well worth it before heading back to the cooler waters of the East Fork. 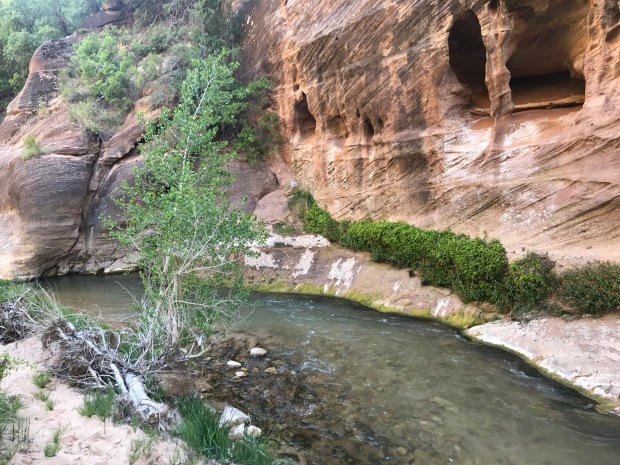 Sometimes I’m amazed at where you find flood debris, like the log stuck high in the creviced alcove on the right.

The river began getting a little swifter and slightly deeper before arriving at an obstacle- a small boulder and log choke that created a little waterfall. According to my notes I had two options- number one, climb carefully down the rocks and logs into a chest deep pool at the bottom. Number two- climb up a gully to a chimney descent on the left wall to bypass the obstacle.

Both options presented the same problem though. To get to the start of either of them I had to pass through a narrowing in the river that looked relatively deep. I tried to find a safe route down to the jam on the right side with no luck. I tried to find a way over to the left side rocks, but they were too slopey.

So I cleaned out my pockets and stashed my electronics up high and into the river I went hoping the narrow chasm wasn’t as deep as I feared it was. But my fears came true. It didn’t take very long before I was chest deep and the current was pushing me off my feet and floating me downstream for about 15 feet where I was able to regain contact with the wall and the ground. I stayed surprisingly calm through the whole ordeal until I realized my pack was on my back that whole time and had also been completely submerged.

I was a little panicked. Don’t ask me how I could forget something as big as that. The thought hadn’t even crossed my mind as I was entering the river. Every other time I’ve been chest deep has been on a side trip. I quickly pulled it off and watched as water drained out of the hole that has been worn into the bottom of my pack over the last eight weeks. I flung open the pack and felt around inside.

Soaked to the skin and dripping everywhere, a wave of relief flooded over me. Somehow everything managed to come out unharmed. Up the gully, down the chimney, and safely away from the obstacle I continued on down through the increasingly narrow canyon until I reached the beach that signaled my escape route. 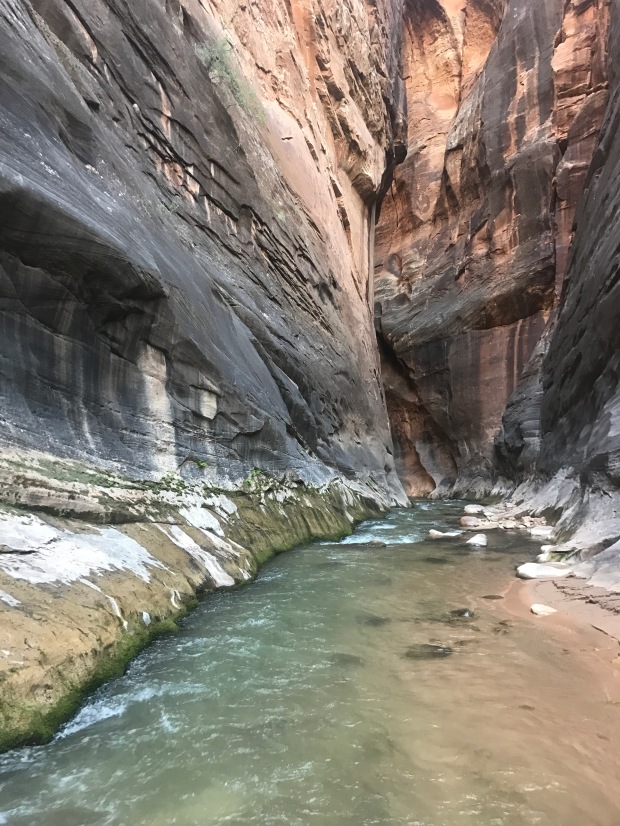 The narrowest part of The Barracks.

Jamaal Green had recommended searching a little ways down this canyon as well, and so I dropped my pack in the sand and continued down through the ever higher and narrower walls into Parunaweap Canyon. 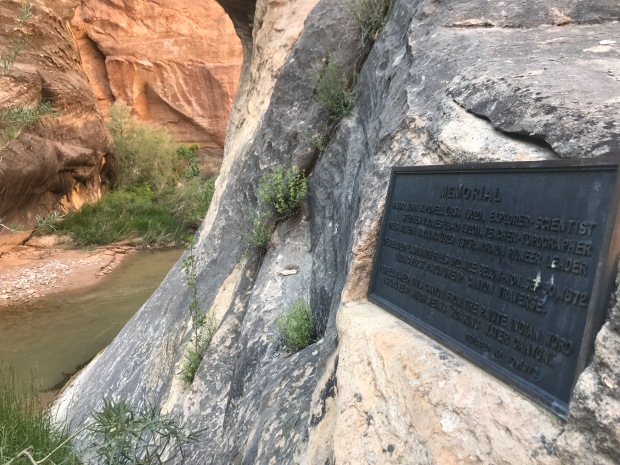 This plaque marks the transition from The Barracks to Parunaweap Canyon and commemorates John Wesley Powell’s first exploration of the canyon in 1872.

I didn’t get very much further as a huge boulder jam blocked the way adding swifter Rapids than I wanted to ford into the river, but I can see why Powell raved so extensively about the area. The reflections of the peaks in the river’s calm side pools. The huge colorful narrow sweeping walls. It was all a site to treasure. 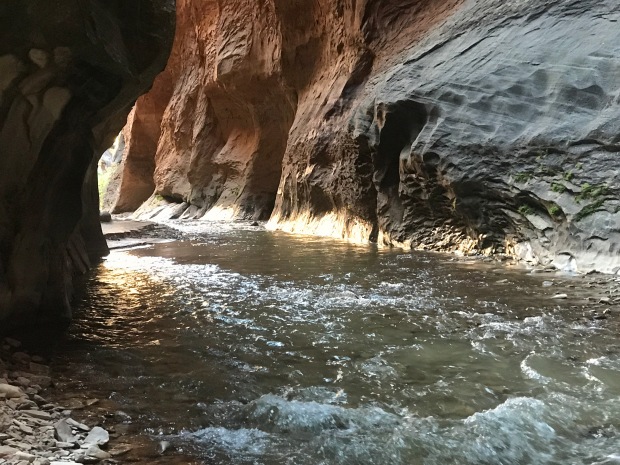 Looking back upstream through the first riffles of Parunaweap Canyon. I was surprised at how difficult it was to walk against the current.

With the day finally starting to fade and the diversions exhausted I was finally ready to begin he ascent out from the river bottom. It was steep, but not horrible with solid rock for scrambling and some well placed cairns. Before I knew it I was looking down on the river. I was also back in the sun for the first time since the obstacle and was amazed at how quickly everything dried out after having been soaked through for so many hours.

The final views of the river from the top of my exit route.

Weaving through some beautiful rock formations on a gently ascending ridge I found an amazing campspot with sweeping views of the surrounding countryside in the slickrock just outside of the Zion Park Boundary. It wasn’t quite as far as I had planned on going, but you can’t turn down a good spot.

As I began to cook dinner- I had another momentary panic when I realized my lighter had been submerged in my hip belt and wouldn’t light. I had no other fire starting material with me either, which is unusual because almost always carry a backup. Prepared to eat cold mashed potatoes for dinner, I was relieved when I gave the lighter one last flick and it started up. Phew. 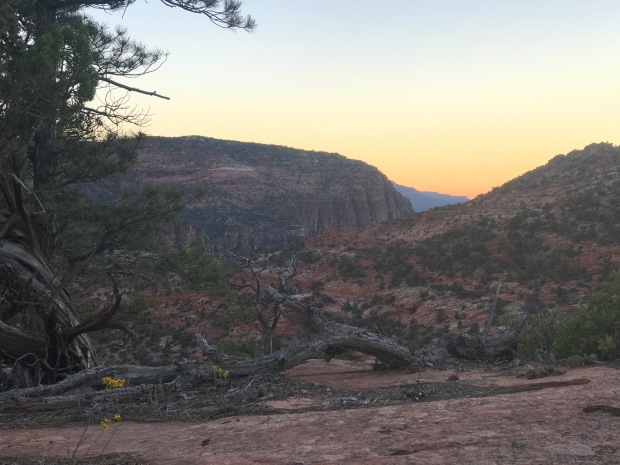 A muted sunset marked my last solo night of the trip. Tomorrow I enter Zion, where I expect to encounter hoards of people and eventually meet up with my friend Laura who will be joining me for the last few days. I am so excited to see her- It’s been nearly two years. Still hard to believe this trip is nearly over. By this time next week I will be back in Seattle. Enjoying the solitude for one final night. 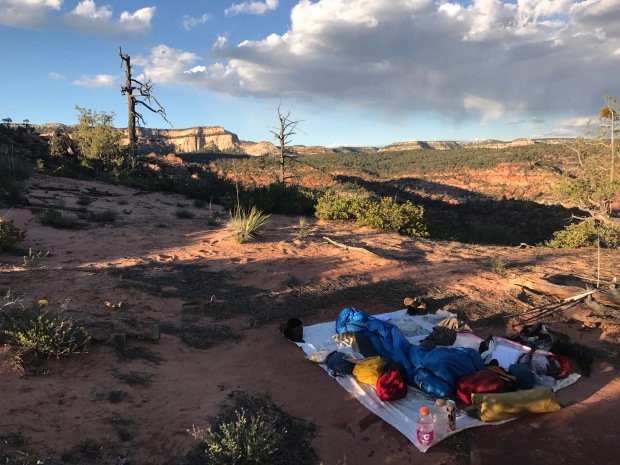 Alone on the border of Zion. I couldn’t have picked a better campsite for my final night by myself.