Today’s Miles Sponsored By: it could be you! Donate Today!!

Finding the activation energy to leave town can be difficult sometimes. Especially when you find yourself sitting in a coffee shop with a gigantic delicious cinnamon roll. 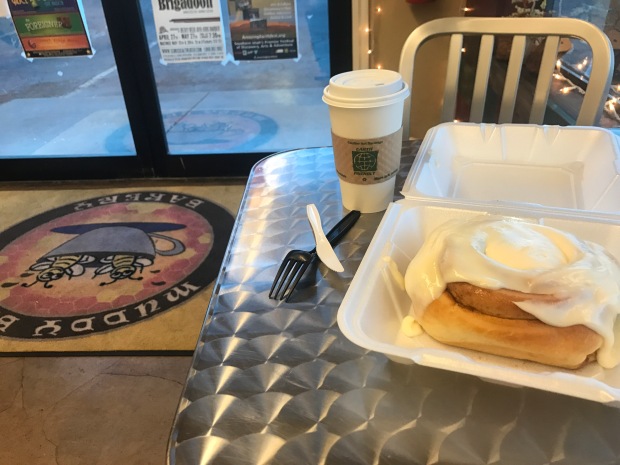 As a trip winds down, I always find it little more difficult to get going too. The mind starts racing back to all the things that you need to pick right into at work and life. Fortunately once you start walking a lot of that goes away. You just need to get to the walking. I also wasn’t too concerned about getting out of town as I has plenty of time to do these next few days into Zion where my friend Laura is meeting me. No reason to push it.

So after a slow morning in town and about an hours wait on the side of the road a 15 passenger van pulled up and asked where I was going. When I said Colorado City, he said “Oh! Are you a Harmon?” Even though I wasn’t a Harmon, he still gave me the ride.

Leroy is a local who has lived his entire life in Hildale, Colorado City’s connected sister town just across the border in Utah. He shared stories about back in the day before the highway was paved the Bishop would send all the local boys out to ride their bikes acrosss the Department of Transportation’s counter strips so that the traffic numbers could get beefed up. He also talked a lot about the recent tragedies in the community- some car crashes that killed relatives, and the huge flash flood that came down Short Creek in 2015 and killed 3 mothers and 9 of their children who were stuck on the far side of the river in their cars after visiting a park for the day. It sounds like the community was pretty devastated by it.

After he dropped me back off on the side of the highway I headed up into town. Colorado City is infamous for being the center of the Fundamentalist Mormon Church where plural marriage is still actively practiced. Over the year’s there have been numerous federal raids in the area and there’s definitely a weird vibe to the place. Every house is fenced with huge I’d almost call them barricades. Six, seven, eight feet high- privacy is definitely an important value here. 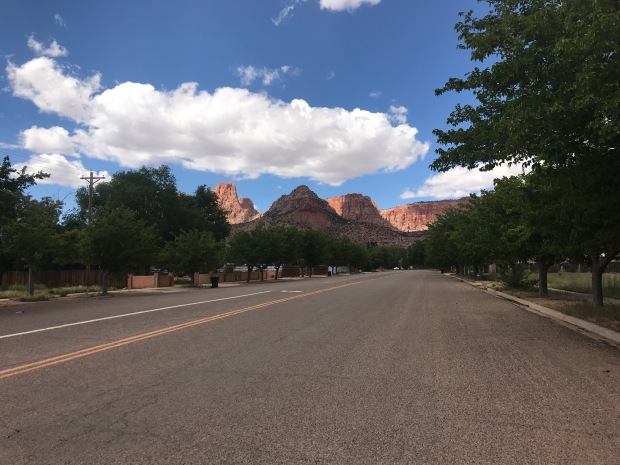 There wasn’t much in the way of people out on the streets. A few women in prairie dresses riding horses, and that was about it. I did get passed by numerous cars filled with young blonde boys- the drivers even didn’t look much older than 13 or 14. I could feel the stares in my direction.

The small “business center” of town included a hardware store, a dusty windowed bakery that said it was open, but appeared locked, and a drive through chicken finger restaurant. Through the city I went, crossing the state line (and time zone!) into Hildale and then following the roads further back until they dissolved into sandy OHV roads heading up Short Creek (pronounced “Crick” locally).

Short Creek babbled away for a bit before I turned onto real trail and steeply climbed up Squirrel Creek’s side tributary canyon to the top of he Vermillion Cliffs. 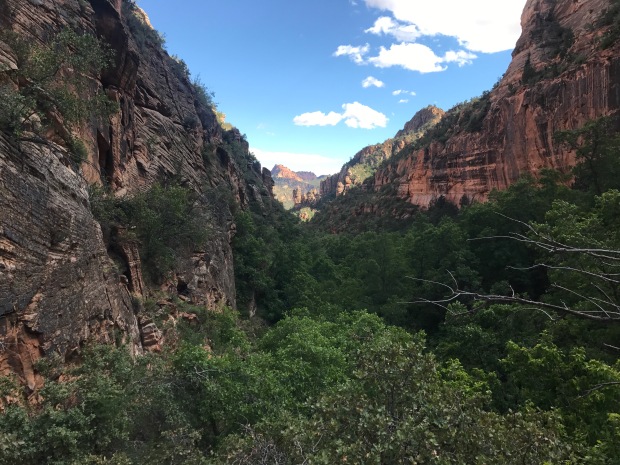 Half way up Squirrel Creek and heading back up the Staircase.

A rock formation called The Beehive- one of many similarly named I’ve passed all along the trail- towered above the trail. Utah is actually known as “The Beehive State” supposedly a testament to the community oriented and hard working nature of the early Mormon pioneers, so that’s maybe why so many small mountains share that name. 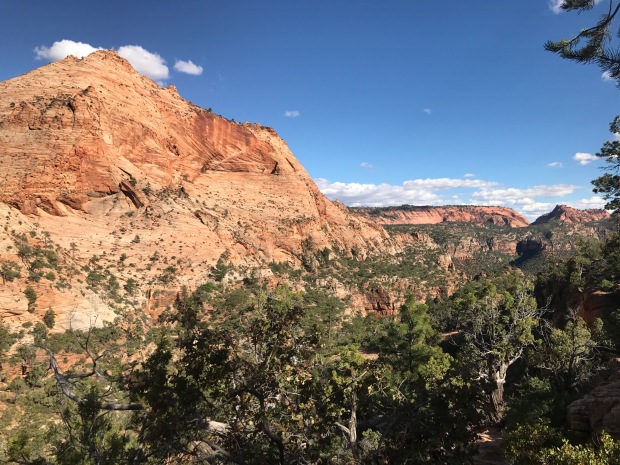 The Beehive towering above the canyon.

Up top I was inside the Canaan Peak Wilderness, but you’d never know it based on all the OHV tracks that mar every wash and pack trail in the area. Many of the tracks looked very recent. It’s disappointing to see that so many people have so flagrantly violated the spirit of the Wilderness designation. 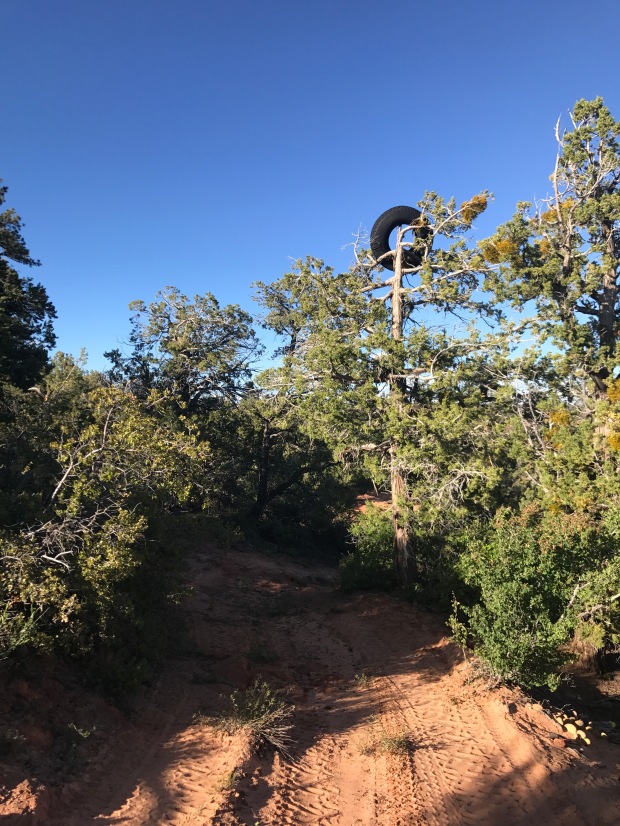 Technically a pack trail in the Canaan Peak Wilderness, it has unfortunately been heavily used by OHVs.

I wove up and down over countless small bumps for a number of miles before finally flattening out in Broad Hollow (now out of the Wilderness) where the sandy roads made for surprisingly easy walking. I hiked late into the day finally finding a nice juniper to plop down beside just before twilight. Since I’m not carrying much food for this section I decided to spoil myself and pack 2 cans of beer out with me. Such a great luxury!!! 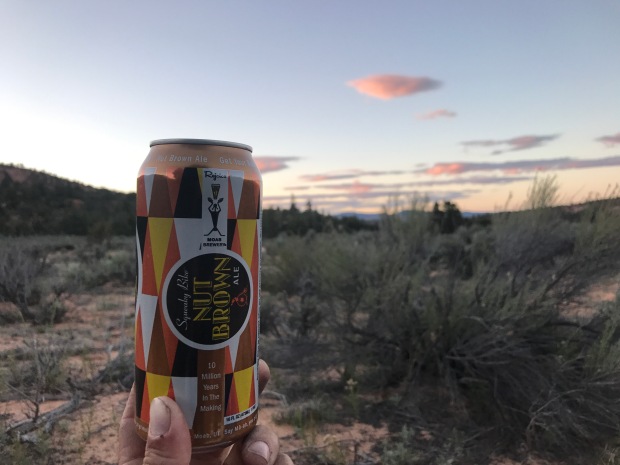 Beer in the backcountry. The simple luxuries.

The White Cliffs of Zion are just starting to become visible in the distance.Two more nice relaxed days and I’ll be there! 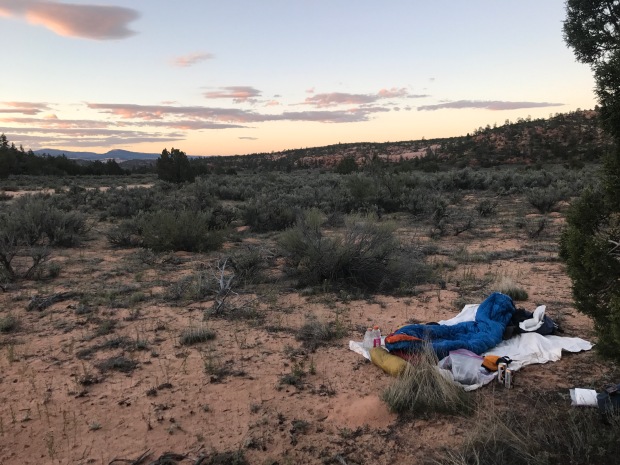 Sunset at camp. The Cliffs of Zion peaking out over the horizon. 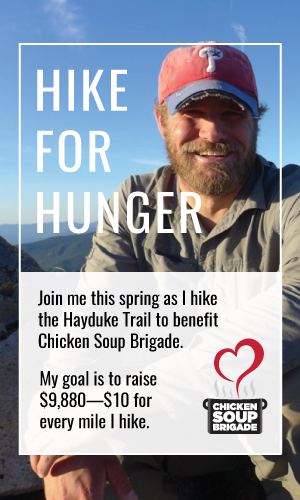