It was nearly impossible to fall asleep last night. Cars entered and exited the area for most of the evening slowly driving back trying to find a spot to set up. And it was So. Hot. My sleeping bag was unzipped the entire way, draped over me like a blanket. I took off my thermal top. Nothing helped. My sweat formed a nice sticky wet film along my sleeping mat in the morning.

I was thankful for the dawn. With Marmot and Gabriel due to arrive at The Weeping Wall around 8am we figured we’d catch a 7:30 am shuttle. What we were not anticipating was the huge line awaiting us to get on the shuttle! We had to wait through 3 shuttles before being able to board – a full half hour in line, hoping that they received our messages that we were running behind schedule.

I was so excited! I hadn’t expected to see them until our friend’s wedding in Leavenworth in a few weeks and so to be able to be there when they finished was such a fantastic treat. The shuttle went pretty quickly, Laura and I beginning to recite verbatim the park narration that we had now heard four or five times.

When we got to the shuttle stop I nearly ran off. Eyes darting around, looking for a pack, ready to give a hug. Eager to pass off the celebration kamboucha we’d brought them (Laura and I figured 8am was a tad too early for beer). But there was no-one there. Where were they?

Laura popped into the bathroom as I shouted their names a few times with no answer. Uh-oh. What if they hadn’t gotten our messages? What if they hopped on a return shuttle thinking we were going to meet them at the Visitor Center instead of the Wall? There was no cell reception here and I hadn’t thought to bring my Inreach today so we had no way to communicate. We weren’t quite sure what to do. Do we wait? How long?

And then I saw them. Two figures ambling down the turn-off trail to the Weeping  Wall. I whooped with joy! They whooped back! The startled tourists weren’t quite sure what to think with all the commotion. I literally sprinted up the trail, dropped everything I was carrying, and was enveloped in one of the best hugs I’ve ever had in my life. 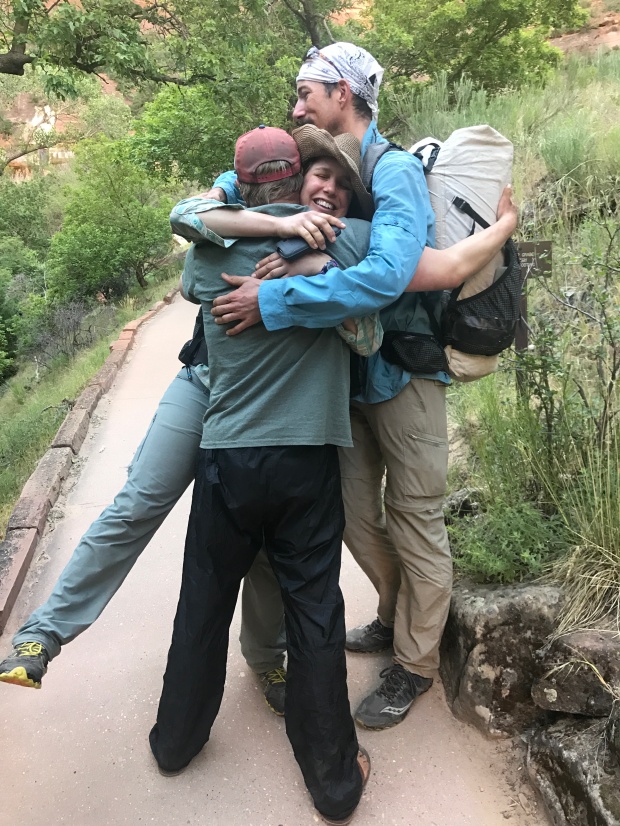 There is something so special about being able to be there for someone when they finish such an amazing journey. Having Laura there when I finished meant so much to me (especially since I got to hike with her too!!) and I’m so glad we were able to be there for Marmot and Gabriel.

It didn’t take us long to get a shuttle back to the car, and after a brief stop at the grocery store to fuel our bodies we were on our way to Las Vegas chattering all the way about where we had just been, what we had felt, what we had seen. Comparing notes. I was worried it was too much exclusive “hiker talk” for Laura, but she told me later she actually really appreciated it because Marmot and Gabriel knew the kinds of questions to ask that she didn’t, and so she got to hear so many new and detailed stories.

And then we were in Vegas. When we planned the trip, I didn’t think it would be too overwhelming. I’ve been to New York, I’ve always lived near major city centers. Boy was I wrong. I don’t know if overwhelming is quite the right word, though. I think more than anything I was just disappointed. I had expected a fun atmosphere of  quirky sights and sounds along the famous Vegas Strip. Instead I just found a long string of malls filled with chain restaurants and stores. Nothing unique that you couldn’t find in any other big city.

I thought it would be fun to maybe play a round of roulette or a few hands of blackjack. But I couldn’t even step inside the Casinos without being completely overwhelmed by the putrid smell of cigarette smoke that invaded my lungs and seeped out into the massive malls as well making the whole thought of being inside repulsive. I didn’t even know that there were still places in the US that you could smoke indoors. 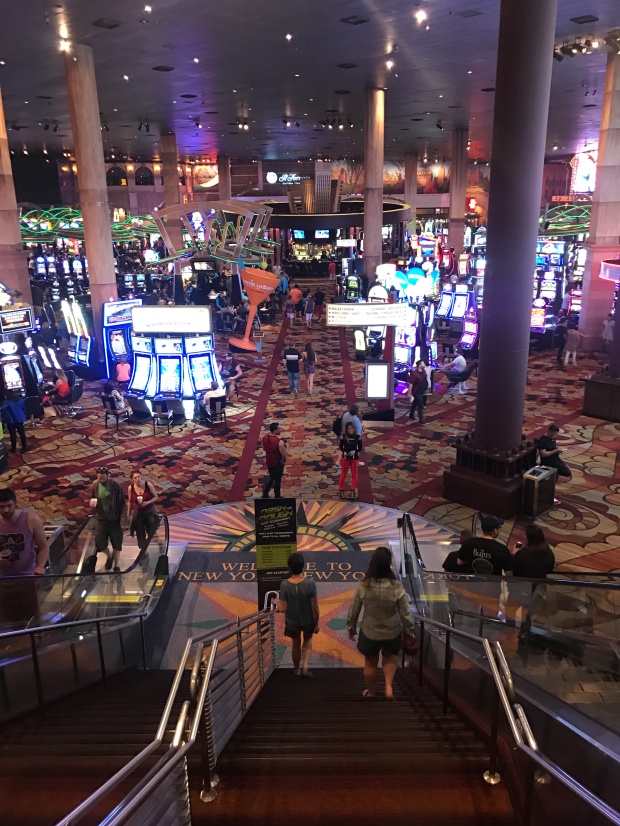 Laura and Marmot heading down towards our very brief stay in the casino.

I never really actually thought I’d enjoy Vegas, but I thought it was because I would find it a little too overstimulating. Yeah it’s got the lights and the fountains and the indoor Venitian gondolas, but it’s all just a thin veneer. Flash with no true substance. Give me the grit of Broadway any day.

But as I’ve consistently learned through the years, the people you’re with can make even the worst place a great memory, and that was the case here. The four of us went out to eat at an “authentic” Irish themed restaurant in New York, New York. The best moment? Gabriel ordering an “Irish Bomb” without knowing what it really was. He had to be shown the wikipedia page before he was convinced that he was really supposed to drop the Baileys into the Guinness. 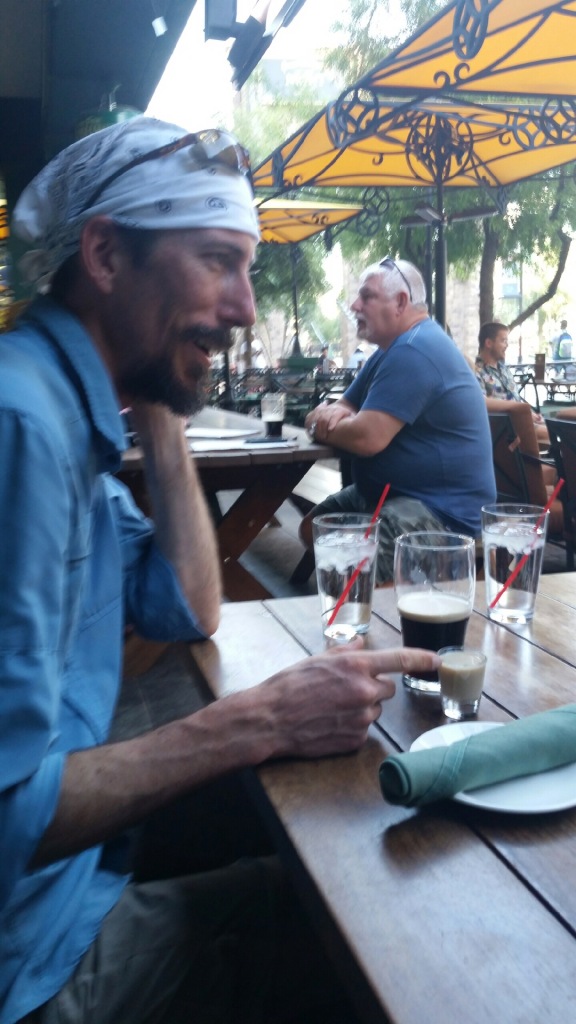 I’m supposed to do what with that?

After dinner Laura and I ambled our way the mile or so up the Strip to The Mirage where we had tickets to see Cirque du Soleil’s “Love” that evening. The city planners were pretty genius in their sidewalk designs too, constantly funneling people back into the giant malls that line the way. With all the extra navigation needed just to keep yourself going straight it kinda felt like I was back on trail.

The show itself was spectacular, if a little bit more over the top and more overstimulating than I expected. I’ve seen Cirque shows before, but nothing quite compares to this. I’d forgotten just how trippy some of the Beatles music can be, and the artistic director definitely plays up on many of those elements. It was the perfect way to celebrate.

Nighttime on the strip.

The city really does take on an entirely different atmosphere after dark when it’s completely lit up, and so we decided to walk back down the strip to the hotel. I was fascinated by all the people stopping in the middle of the street and just staring up. At Zion there were tons of people on the trails too – and the huge cliff walls were more than stare worthy, but people didn’t stop in the same way. How come?

On our return trip we detoured over to the Bellagio to watch the famous fountain show. For such a classic and classy place I expected the show to be accompanied by maybe Mozart or Beethoven or Handel. What did we get instead? Lee Greenwood’s “Proud to Be An American”. At least the fountain show was pretty (though i wonder about the water usage…we are in the middle of the desert after all) 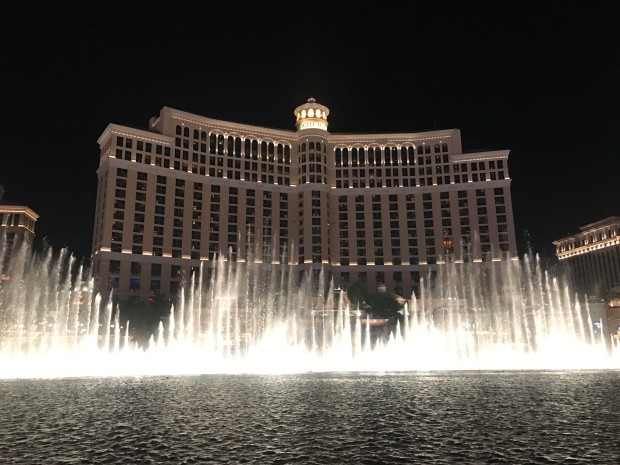 The famous Fountains of the Bellagio

Back in our tiny hotel room the four of us rejoined and stayed up chatting until the late hours of the night. Or was it the early hours of the morning? No-one really wanted the night to end. What a surreal day. The wilds of Zion to the wilds of Vegas. Tomorrow Laura and I head to the airport early while Marmot and Gabriel rent a car to drive back Moab where they’ll pick up their own car before their week long road trip back to Seattle.

Words can’t express how precious these last few days with Laura and Marmot and Gabriel have been and I’m so thankful to know such amazing people. The perfect end to an incredible trek.

On a final note- every day I inch closer and closer to reaching my fundraising goals for Lifelong! This will be the final time I mention it, but please consider making a donation if you’ve enjoyed following along. I have lots of postcards to still send out, but even $10 helps provide almost two nutritious meals for our clients. Your support goes a long way!

Keep your eye out in the next few days- I’ll probably have one or two more follow up posts, including a map-link to my track. Until then, thank you to everyone for taking the time to read along, ask questions, and give feedback and support. It definitely was a huge help in keeping me going. For folks in Seattle (or the PNW in general) feel free to stop by Christa and my place on Sunday June 4 for a welcome home party. We would love to see you there. 🙂