When I set up camp in the picnic area I figured it was late enough in the day that I could go relatively undetected. I didn’t even start rolling out my things until almost 7:30 just to be safe. And then at 8:15pm, a couple comes by. And then this morning as I’m getting ready at 6:30am a car pulls up! It’s not even been light for about 15 minutes!! Twice busted. Oh well.

It turns out the driver was Bobcat, PCT ’08 who had just gotten off a 2 week Grand Canyon River trip. It was nice to chat trail for a bit and then he offered me some dark chocolate. Said it was Trail magic and that I couldn’t refuse.
So with a brand new dark chocolate bar in my pocket I headed back out for another 5ish miles of road walking through the rest of Butler Valley. 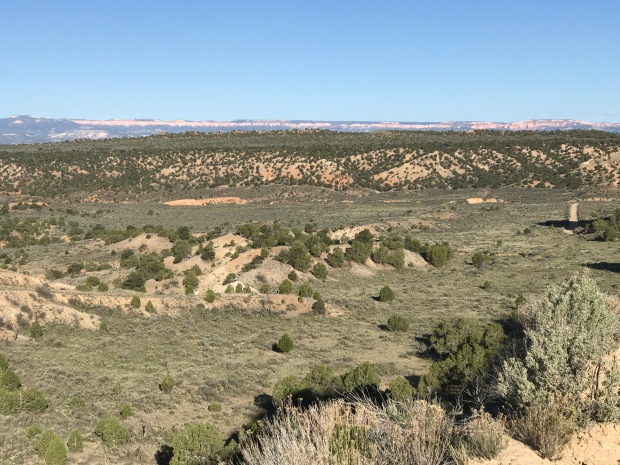 Looking back at Butler Valley.

I finally ended up at the trailhead for Round Valley Draw. I was super excited because this would be the first true long slot canyon. The draw started off like any other wash, a little water, sandy bed and then in the distance you saw a feint crack appear.

Lydia’s Geopet is excited for the slot hike! Do you see the opening in the back?

The slot! I walked closer to inspect the drop off.

Looking down into the crack

It’s pretty amazing how it just suddenly opens up. I carefully lowered myself down into the first section of tight angles and the white striped smooth and rounded sides.

The worn rounded slopey walls of the early part of the slot.

And then there was a 10 foot drop! Time to bring out the rope so that I could lower my pack down first before gingerly climbing down myself.

Once inside it widened up a little bit in the floor, but not much. And the walls kept getting taller and taller! 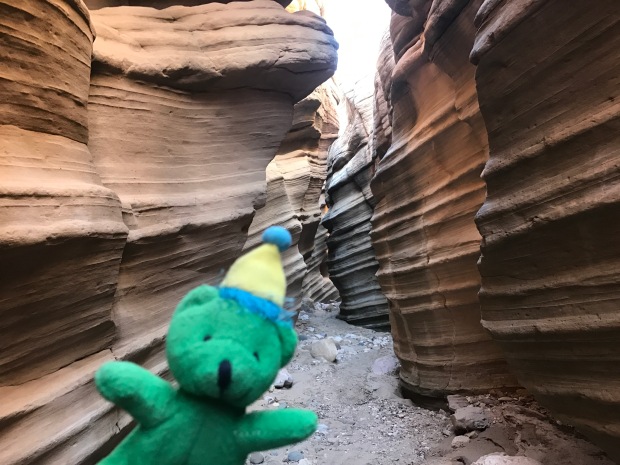 Lydia’s Geopet is so excited!!

The rock eventually changed to a reddish color and some sections got so deep that I felt like I almost needed my headlamp to see. If you looked up, it appeared that someone could just step across the crack opening at the top. 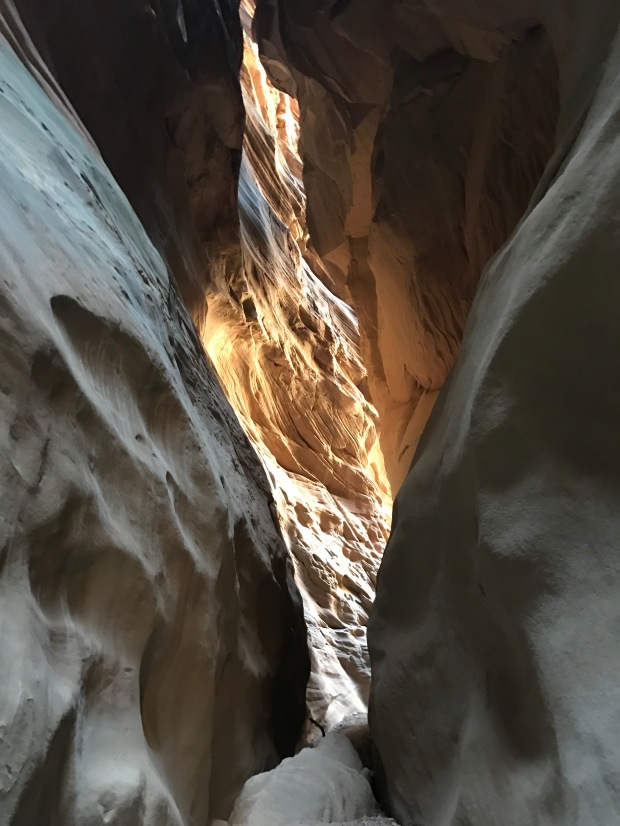 The photo doesn’t do the glow on the rock justice.

The slot was great! But after about two miles it slowly opened up and I found myself in Hackberry Canyon- where I would remain for the rest of the day.

Hackberry surprised me with its beauty. I immediately noticed a few ponderosa when I entered, something that I haven’t really seen on this trail. Early on in it’s dry creek bed the route was a sandy wash. 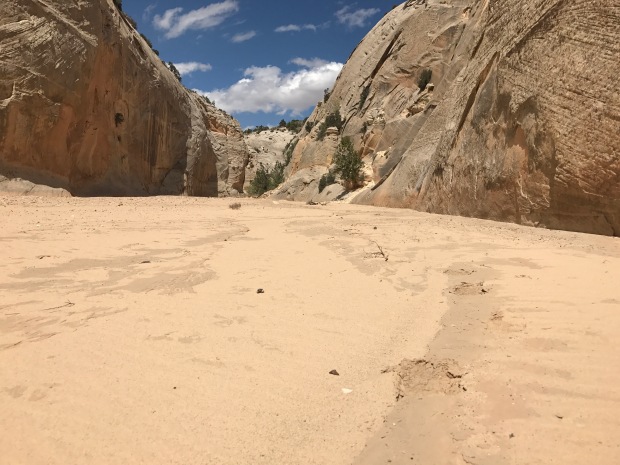 My footprints were the only ones around.

The sand was frustrating but the scenery more than made up for it, so I didn’t mind nearly as much as I did in the last section. I plodded along, not really pushing any pace today, when around a corner: BOOM!

A spring bubbles up and suddenly there’s a whole new world- cottonwood and willow and grass and all the green things fill the once sandy canyon floor. A creek runs through the middle of it. Most of the time there are good cow paths to follow, too so there’s not nearly the bushwhacking I was expecting. But no matter how hard you try, you still end up with some creek walking, 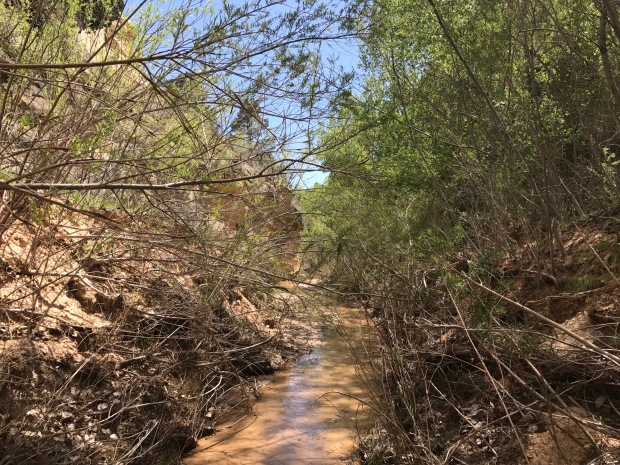 No way to go but through the middle!

I ran into two backpackers about a mile after the creek started who seem to have done a ton of trips all through this area. They’re basically doing my route in reverse.

The cliff walls began changing too as the reddish rock began to take predominance.

I kept my ambly pace going for a bit longer until I noticed I had two waypoints marked on my gps- one for a cabin and one for a moki dwelling. The cabin was right off the trail but easy to blow by if you’re not looking for it as it sat up on the bench above the trail. 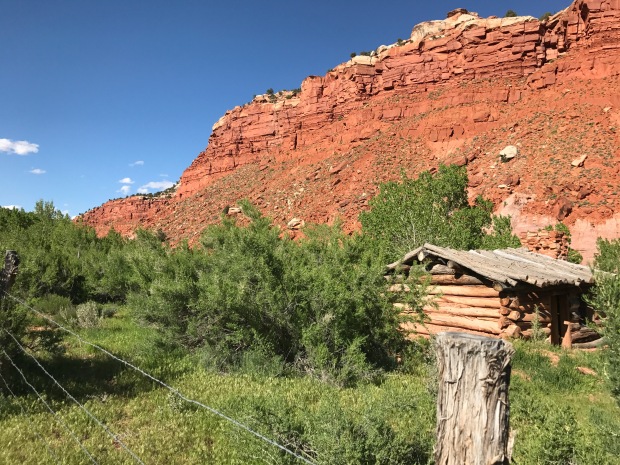 The Watson Cabin is over 100 years old and was built by a Wisconsinite who tried to wash for gold in the area but that didn’t pan out. When he moved back to Wisconsin others tried to farm the land, but the spring floods destroyed the irrigation every year at which point it was abandoned and used intermittently as a line shack for passing cowboys. It was recently restored by the BLM.
The moki dwelling was a little harder to find. It was up the drainage across from the cabin. I climbed and climbed up and searched all around, got to within 30 feet of it according to the GPS, but never found it. It’s most likely nestled pretty deep into a shelf in the canyon. I spent over an hour searching to no luck. At least I got a beautiful view back down into the valley! 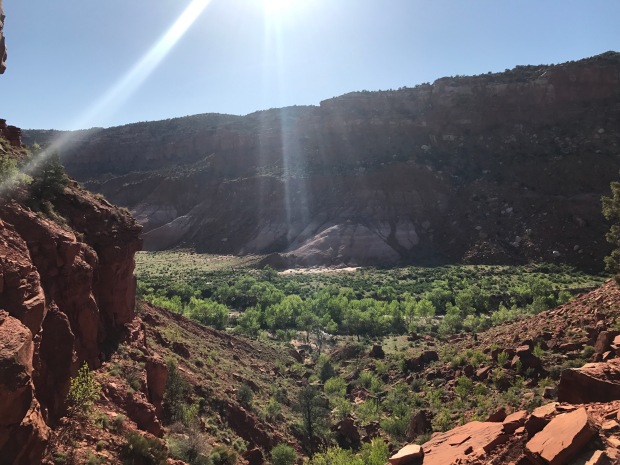 The view back down into the Valley. You can see the cabin!

By the time I got back to the cabin where I had dropped my bag it was nearly 7, so I decided to call it for the day. Camping inside the cabin complex. Enjoying the brush with history. Made water at the creek, ate my cous Cous dinner a little late and am now settling in for the dark night as twigs snap and leaves quietly rustle around. Good night world!

One thought on “Day Twenty-Six: Slots and Sand and Creeks”